Gerry Russell was one of those men you’d follow wherever he led. And hundreds of Marines did follow him from the time he entered the Marine Corps in 1940 from Boston College (where he’d starred on the track team and was the first alternate on the 1940 U.S. Olympic Team in the 800 meters) through the jungles of Guadalcanal, the black sands of Iwo Jima, wounded in both campaigns, the lowlands and mountainous terrain of Korea, where he was again wounded, and at other duty stations around the world.
On Iwo Jima, he was first executive officer with the 2nd Battalion, 27th Marines, then battalion commander after Maj John Antonelli was wounded and sent back to a hospital on Guam. During the Korean War, Gerry commanded another battalion and served as adviser for a South Korean brigade. Throughout the rest of the 1950s and up until he retired in 1968, he held positions of leadership at Quantico, Va., Camp Lejuene, N.C., and the European Command in Paris. During the Cuban Missile Crisis, Gerry served as Commander of the U.S. Ground Level Defense Forces at Guantanamo Bay. 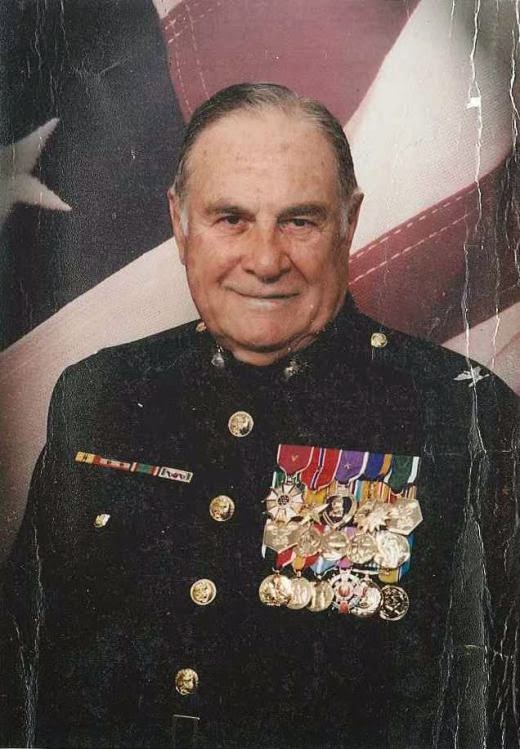 He retired on Friday and went to work on Monday at Penn State University, where he spent nearly 20 years before retiring again in 1987. During those years, Gerry served as assistant to the provost, assistant to the president, assistant secretary for the Penn State Board of Trustees, assistant to the dean of health and physical education, and as assistant and associate dean. After retirement, he volunteered and continued working Penn State track meets and sponsored or created a foundation to hold special athletic meets for children with disabilities.
I first met the colonel in 2005 with other Iwo Jima veterans when I made the first trip with Military Historical Tours to Iwo Jima for the 60th anniversary of the battle. There I walked along Green Beach with John Britton, where he’d landed with the 28th Marines. He had been graduated from the high school and the university where I’d taught in Urbana-Champaign, Ill. I met Jack Lucas, the youngest Medal of Honor recipient ever for what he did six days after his 17th birthday. And that’s where I met John Butler, current Fifth Marine Division Association  president and his brother Clint, both Marine veterans whose father, LtCol John Butler, First Battalion, 27th Marines commander, was killed in action on Iwo Jima when they were kids. The list goes on–there were three planes of Iwo Jima veterans and others to attend the ceremony on Iwo Jima.
Walking among these Iwo Jima veterans was sobering, thinking about what they had endured on this island to help secure our way of life.
After the trip to Iwo Jima and Guam, I went back to Honolulu for a post-tour with a much smaller group. Gerry was in that group. Jack Lucas was there, too; Dale Quillen, a Nashville attorney who had been a dog handler in the Third Marine Division on Iwo Jima was there; Frank Wright, a Navy Cross recipient with the 28th Regiment, and his wife were there with others of us who were spending a few extra days to visit and pay tribute to the battle sites and memorials from the Japanese attack on Dec. 7, 1941, and the sacrifices of those who defended the island.
We visited the sunken USS Arizona, a trickle of oil still floating to the water’s surface from below where the remains of sailors and Marines were entombed and sealed in the bowels of the ship after the attack. We visited the USS Missouri across the way, on which the Japanese had formally surrendered in Toyko Bay and World War II came to an end. And we stood in formation for a ceremony of remembrance at the Punch Bowl Cemetery. At the Marine Corps War Memorial at the entrance of Marine Corps Air Station Kaneohe Bay, the colonel spoke at the ceremony, recounting the battle for Iwo Jima and remembering the sacrifices of those who never came home.After five days around the island, we all headed home. Before we went to the airport, he told me he was soon going to be in Chicago for four days being interviewed by the Pritzker Military Library and invited me to Chicago for dinner one night. So I drove up to have dinner with him and talked about his interviews (see here.) It’s a fascinating record of his service and that of the U.S. Marine Corps.
As we talked more Marine Corps legend and lore, I asked him if he would write a blurb for my soon-to-be-published novella, Iwo Blasted Again (www.talespress.com), and handed him a copy of the manuscript.
He said he would and said, “You seem to like the Marine Corps pretty well. Why didn’t you stay in?”
“They wouldn’t let me have long hair and a beard,” I said, half-seriously.
“You like that?” Gerry asked and laughed lightly.
For the blurb, he graciously wrote that I “had produced a unique portrayal of two vital aspects of what many combat veterans experience in their lifetime. He presents a vivid, very accurate, graphically true depiction of the horrors the individual encounters and endures in battle. For the remainder of their lives, most veterans extend great effort to blot out the memories of their gruesome war experiences. To some degree, they succeed. But, inevitably, it seems that in their later years, the long-dormant, suppressed memories return with surprising, haunting clarity.”
His perspective of the years following combat rings true for many veterans.
I saw the colonel several other times at Combat Veterans of Iwo Jima (later the Iwo Jima Association of America) symposia and banquets, stopped by to see him once in College Station, Pa., and talked with him on the phone now and then. He was a wealth of information, kind, considerate and always carried himself with the dignity and respect befitting a man of his stature.
When he was about recovered from a broken pelvis last year and was taking calls, I heard from somebody looking for the oldest living Iwo Jima veteran. So I called Gerry to see how things were going and to ask him if he might know who that would be. It was the last day of April, right before his May 1 birthday.
He laughed when I asked him and said, “I don’t know. I’ll be 97 tomorrow. If I live until tomorrow, I may be the oldest.”
When he died on Feb. 24, 2014, he may not have been the oldest, but he was a good man, an outstanding Marine and one of the two last living battalion commanders from the battle for Iwo Jima. The other one, Maj Sheldon Scales from the 26th Marines, died a couple of months later. Gerry was laid to rest in Arlington Cemetery on July 16 with full military honors.
“It was a magnificent send-off,” his daughter Maureen said.
No doubt it was—Col Gerald Russell was a Marine, through-and-through, and a man of honor who led by example, one we would all do well to emulate.
No comments:

With the New Year, I've promised myself that I would learn to participate with Facebook and other social media (including my website www.talespress.com). So here I go:
It was great having Tim Rice with us via Skype at the Virginia Theatre in Champaign, Illinois, for the screening of From Here To Eternity the Musical. on Pearl Harbor Day, Dec. 7. The audience comments were very positive, and I received several emails about the show, plus all the great comments I heard directly afterwards.
Here's one sample from a former teaching colleague: "It was pretty cool to have Sir Tim Rice talking with the panel and the audience. I look forward to seeing a tweaked version -- Maybe in Chicago." (Either there or Honolulu, I hope.)
Another man, a Marine veteran, emailed: "Without a doubt, the absolute best production I have ever seen and heard. Les Misérables is now second in my soul."
And I was particularly touched by a comment from a man I've known for several years who gave Tim an emotional thank-you for the show, as it brought up thoughts of his father who was in Hawaii in the military during the attack on Pearl Harbor. I had no idea his father had been in the Army in World War II.
In case you want to see and hear the recording of the introduction and Q&A with Tim from the showing of FHTE, I have included them here:
Introduction:

Tim emailed right after the show, "I was delighted by the very positive reactions to the show/film and was very encouraged by the audience comments (and of course those of you, Valerie and Jeff)."
Also, Andy Hall, the tech manager for the event, received an email from Tim I was copied on after Andy sent the YouTube links: "Thanks to your team we have done the show a great favo(u)r in the U.S., and I am more optimistic than ever that we can make it work over there."
So I hope you have the opportunity to see the musical production her somewhere this year. More posting from me to follow this year, as I become more adept with social media.
No comments: