‘Scared Straight’ opened your eyes back then

Some 40 years ago I came across “Scared Straight” (1978), a controversial program to steer young people away from prisons that was directed and produced by Arnold Shapiro, who won an Academy Award for Best Documentary Feature in 1979.
Although Shapiro, who brought his 1985 “Return to Iwo Jima” documentary to the Virginia Theater when the Fifth Marine Division Association reunion was held in Champaign (Ill.) last October, believed “the concept had a much fuller and longer run” than he ever thought it would, he continued with the concept as a CBS TV movie and several documentaries through the “Beyond Scared Straight” series on A&E (2011-2015).
When I first came across it, the warning in an ad in the Chicago-area TV Guide said, “This program contains explicit crude language and graphic descriptions that may not be suitable for some viewers.” And that was quite accurate. I heard language on the program that I didn’t even hear in the halls of the school where I was teaching. It took me back to the days of my service in the Marine Corps, the redline brig I worked at in the Philippines, and my counseling days at Menard Penitentiary in southern Illinois.
At Rahway (N.J.) State Prison in 1976, inmates had established a program to show kids in trouble what it’s like to be in prison. The program was called the Juvenile Awareness Program. Juveniles from youth homes were sent to Rahway to serve “three-hour sentences.” Three hours of participating in the program was reported to have a lasting effect on a teenager’s life. It purported to show that “scaring the crime out of kids isn’t pretty … but it works.”
After my experience in the Marine Corps brig, where the rate of recidivism was close to zero, I believed in the program.Like the brig,testing and diagnostics were not a part of the experience at Rahway Prison. That was replaced with the sounds of a Marine Corps brig. Peter Falk hosted and narrated the one-hour “Scared Straight” presentation. The youths in trouble were introduced and talked about their image of themselves, their goals, their lives. They were young tough kids, street kids, male and female. They liked their way of life, were proud of it.
One of them bragged that he might get stopped once in a while, but you figured he would be back again. That was the way he was. That’s the way a lot of them were. Their language was tough, but it didn’t have the bite the older inmates had. But these kids weren’t afraid of going to prison—at first. Seventeen of them, black and white, male and female, visited the prison for their three-hour sentences. It was a different world immediately. The tough kids showed none of their earlier cockiness. Nor could they use their own terror tactics to control life around them. They were no matches for the older, tougher and wiser inmates who began teaching them almost as soon as the kids stepped foot in the prison. As they toured the prison, they walked down a cellblock, inmates called after them, expressing their sexual preference—young boys sometimes.
The teenagers were dominated, harassed, threatened, educated, intimidated, cajoled and cursed by inmate volunteers. The only thing the inmates couldn’t do was hit the kids. That didn’t stop them from threatening. And the kids didn’t know the inmates wouldn’t hit them. The kids were scared, too. That made a difference. The inmates told what a prison is really like.
One by one the inmates talked about homosexual rape, prostitution among the inmates and other acts of violence. A black inmate takes a young kid by the belt and guides him to white inmate and asked him if he had a cigarette. The inmate gives him the cigarette and “buys” the kid. That’s the way it’s done. The kids were learning. They saw the raw reality. And they were stripped of their images, sitting helplessly under the wrath of the angry inmates.
Kids were taunted until it almost seemed one of them would blow. But nobody did. They were too scared. And they stayed that way. Of the 17 kids who attended the taped session, 16 of them went straight three months after the taping. One girl was busted for a minor fraction and was given a suspended sentence. At the end of a year, none of the 17 had been in trouble again. That was how the concept worked.
Since its inception in 1976, there have been no major incidents, and almost 10,000 kids have served the sentence. Ninety percent of them were steered into going straight, the program claimed.  After their image had been stripped and they saw life as it is, the kids said they had the insight to see they needed counseling. And the Lifers Hotline was available to them when they thought they were going off on the wrong track and needed to talk to somebody who had been where they were.
Shapiro did a 20-year follow-up (1999) on the original 17 juveniles at Rahway State Prison with the following results: One had died of a drug overdose; one was a recovering alcoholic; one had served a prison term for bookmaking but was now straight; and one was serving a prison sentence for the very thing he said he planned to become, an armed robber. But as of 20 years ago, 14 were free and doing well, and all attributed their turning their lives around to the Rahway experience—if not in total, at least in part.
The film was crude, explicit and graphic. The program was all of that and more. It wasn’t pretty, but it did seem to work. It might not be acceptable in today’s politically correct world—and there were plenty of complaints years ago, but as a prelude to going to prison today, it just might have an effect on today’s youth as it did 40 years ago.

Recalling a conversation with Burl Ives


The famous singer/actor Burl Ives was from a little town of about 100-150 people called Hunt City in southeast-central Illinois, a few miles from the village of Bellair, where I was born and raised. "From Here to Eternity" author James Jones was born and raised in nearby Robinson.
In 1982--13 years before his death in 1995--I interviewed Burl as part of a cultural journalism project called Tales from the General Store that published 27 issues in tabloid newsprint format and was distributed in several newspapers throughout east-central Illinois. Those issues are helping to preserve part of the history and culture of the area, and the entire collection is now available for free through the Digital Public Library of America at http://www.idaillinois.org/digital/collection/p16614coll12/search/.
Burl had much to say about growing up in the area, his career, the musicals in which he performed (Lerner and Loewe's "Paint Your Wagon"), movie roles (Big Daddy in "Cat on a Hot Tin Roof"), songs he sang ("The Ballad of Barbara Allen," where he sees the same image saw when he first sang it early in his life), and more. Read all about him: http://www.talespress.com/Issue_3_Burl_Ives.pdf. 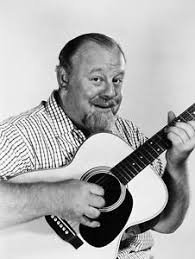