Goodbye to a dear friend

Losing someone close is always difficult, even if it’s a dog. And Skipper slipped away around noon not long ago after the vet had operated on him to relieve the pressure on the spleen caused by a mass and found other problems with the liver and other organs that precluded any quality of life and guaranteed a painful existence.
He could linger awhile, but he would be in pain after the anesthesia wore off. So we all went to say goodbye to him at 11:30 as he was coming awake that morning. We’d already cried a bit individually when my wife called us with the news. But then we cried together as we told him goodbye and watched him slip out of our lives. The girls sat on the floor, petting him and talking softly to him.
Skipper was wrapped in a blanket, shaking with a chill from the anesthesia, but was quite aware of everybody there with him. He shifted his eyes now and then to look at one or the other of us. It was like he knew what he was there for and why we were there. And there was a gentle, kind look in his eyes that seemed to be one of appreciation.
Like a lot of dogs, Skipper understood language. Or at least I like to think he did. And not just English. He understood some Spanish and Vietnamese, too. Tell him no mas when he was doing something he shouldn’t be doing, and he understood. He might rebel if he wanted to jump up on somebody and welcome him or her to the house. But give him a sharp DD Mau! and he’d go quickly to his  pen. If he was uncertain, though, he’d stop at the door and look back to see if he really had to go inside.
He knew what he could get away with from the beginning.
We found him through an ad in the News-Gazette from one of my former students living in Danville when our girls, Caitlin and Jessica, were 8 and 10. He had that frisky pup look in his eyes—they all did, really. We liked him right off.  I suggested naming him Skipper after the Cocker Spaniel I had had growing up.
Everybody agreed. 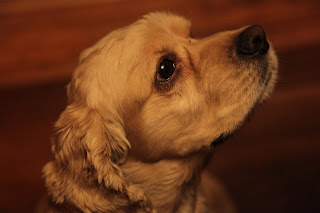 From then on, Skipper was a part of the family. The girls got him a Christmas stocking with his name on it to hang over the mantle with the rest of ours. We got candy and other treats; Skipper got his stocking filled with goodies, too. He’d sit around the Christmas tree as we opened presents and wait his turn. When he’d get a bone to chew on or something else that would take him awhile to handle, he’d go off away from us.
Through the years, he became a constant and familiar presence in the house. We all felt he was there. And when he wasn’t, we felt that, too. It’s taken us awhile to get used to his absence. He’d come and lie by your side, jump up in your lap or wait at the end of the stairs if you were upstairs.
He was a friend, a buddy you could talk to and not worry about whether he agreed with you or whether he thought you had a screw loose. It didn’t take much to keep him happy. A warm bed, some chow, water and a pat on the head would do it. He did much more for us than we did for him.
When he started failing, I noticed he wouldn’t hop up in your lap or jump in the car or get up the stairs quickly. And he wouldn’t eat much, lost weight and was more lethargic than normal. Like any other member of the family then, he went to the doctor.
And like with any medical situation with a family member, there were decisions to make. Once that was done, we hoped for the best. We may have had Skipper for a while longer had we not opted for surgery. But he would have been in pain and very well could have died alone.
While he went far too soon, there is some comfort in having been there with him as he quietly slipped away. Taking him back out where he grew up and roamed the yard, we dug a hole together, placed his bed in it and lay him gently on it between the cushioned ends, took a moment with our own thoughts and then started covering him up.
That was comforting, as well—knowing that we had done our best and were with him to the end.
3 comments: